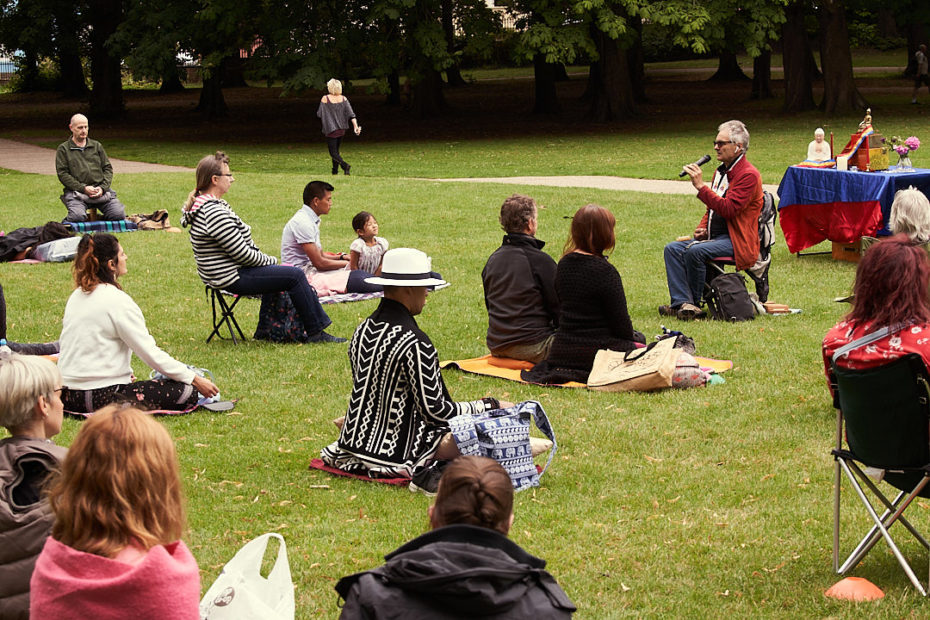 We have just held our first online retreat. It was a great success for those for whom it was their first retreat and for those that have been to many Sangha retreats. Obviously, some elements of a physical retreat are missing. But the online retreat gave many advantages as you could stay in your own home and yet still achieve an immersive dharma experience.

From talking to people a week after the retreat, hearing about and discussing the 4 mind-turning reflections has had a strong effect on their lives. I am sure we will be holding another online retreat in the future. You can get a taste of the retreat by listening to Subhuti’s talk on our YouTube channel: https://www.youtube.com/watch?v=LUr_L332MeI

We also held our first Meditation in the Park event of 2020. This event was special in that it was held at the end of the Online Sangha Retreat and gave the sangha the opportunity to meet in person and in large numbers for the first time in over 100 days. It was also streamed live to those on the retreat who could not make it to the Park. Over 60 people came along to the Park, with 16 beginners who had never meditated before. With a great team of ‘social distance monitors’ who ensured that the government guidelines for religious events were met.
Nick Green, the Centre’s new Admin assistant, and his team of volunteers did a great job of making sense of the government guidance, carrying out a risk assessment and putting in place practical measures to mitigate those risks for infection transmission. Have a look at our YouTube channel to get a sense of Meditation in the Park and hear from those who took part:
https://www.youtube.com/watch?v=mqGEd8L63k8

With the limit of only 7 people in the Buddhist Centre and other venues with similar caps, it is clear that open air events are the best, and importantly, safest way for the Sangha to meet in larger numbers whilst restrictions are still in-place. The Buddhist Centre is open but not in the limited way we usually think. A Buddhist Centre is not a building but it is the Dharma teaching and the people who form its Sangha. So we can look forward to enjoying our wonderful Ipswich public open spaces along with other members of the Sangha as the
summer unfolds.

Other events to look forward to this month are some long delayed Mitra ceremonies. These are likely to be hybrid events, similar to the Meditation in the Park, with some physically at the event but many more able to join online.

Looking a little further forward, we have recently heard the great news that two of our sangha are to be ordained this year. Sheena and Clare have been working towards ordination for many years, going on specialist retreats, studying and, most difficult of all, sometimes challenging personal inner practice. All that hard work has now been acknowledged by the local Order and the Public and Private Preceptors. In Triratna, we talk about spiritual progression and living a full Buddhist life in terms of deepening our commitment to the Three Jewels; the Buddha, the Dhamma and the Sangha, our ideals. In Buddhism this is called Going for Refuge and every day, around the world, millions of Buddhists chant the Three Refuges, committing themselves to these ideals. Sangharakshita has graduated that deepening of Going For Refuge into six levels; Cultural, Provisional, Effective, Real, Ultimate and Cosmic. You can listen to his talk given in 1978 that explains more fully those six levels. https://www.freebuddhistaudio.com/audio/details? num=137

As a Mitra we can be said to be Provisionally Going For Refuge . We are just learning whatBuddhism is and how to try to live a Buddhist life. At Ordination we now know how to lead aBuddhist life and we have enough internal drive to put that knowledge into practice, we havebecome effective practitioners of Buddhism, we are Effectively Going for Refuge . Many of you will understand these terms, but if you do not then please ask your friendly Order Member to explain them.